With the England and Wales Cricket Board banning some players and spectators from future events over racially-tainted behavior at a county match in Kent, South African cricketer Quinton de Kock is defending his decision… 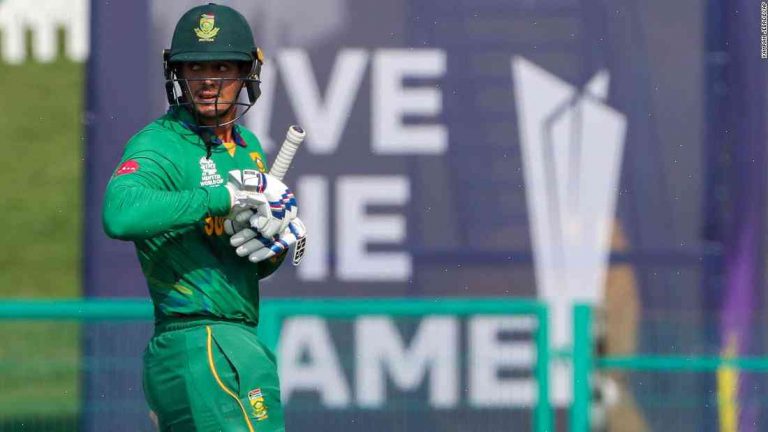 With the England and Wales Cricket Board banning some players and spectators from future events over racially-tainted behavior at a county match in Kent, South African cricketer Quinton de Kock is defending his decision to take a knee instead during a game against Yorkshire.

In an open letter to cricket followers in South Africa, de Kock wrote that a “fellow cricketer noticed me bowing my head and removed my shoes. I just wanted to observe what had happened in front of me. I saw a few people laughing and I thought: wouldn’t it be cool if we all knelt as a group?”

British media speculated that England did not want a repeat of the incidents in Australia, in which a number of the umpires, including Aleem Dar and Michael Gough, have been accused of racism. But in his letter, de Kock also writes about his own experiences at a cricket event where the commentary was “not just bad, but horrible,” with a “creepy” atmosphere, a lack of regulations for team bonding and a “warm and welcoming” crowd.

“I don’t know why but it was not only uncomfortable but really offensive,” he writes. “That being said, it happened and my feet became dirty, (I’m forever reminded of that incident), as my wife protested. I did not share this anecdote because I felt ashamed. I have been hit by a ball in the past and my knee goes through. I played football with my daughters and the knee goes through. I felt the need to explain my discomfort to my dad and sister.”

His refusal to put his hands over his heart when the national anthem is played is just part of what many fans may find controversial about the cricketer. Rather than a proud national anthem and display of affection between nations, the “South Africa” anthem has been picked from a pre-recorded talent show competition. At the opening ceremony in early April, the national anthem was used as part of a South African performance called “Jabulani,” which was later ditched when officials learned it was not an official part of the opening ceremony.

Some commentators have attacked the decision to set up the national anthem with a song that has little to do with the African nation.

“There was nothing to celebrate – except as the goat in the bar,” said the chief editor of the Express newspaper in England.

South Africa will play its final two matches in the World Twenty20 at the Oval in London with Pakistan as they look to pull out of the pool stage, but when asking for comment from De Kock’s team, South Africa Cricket said his two-day absence from the squad was part of a deep team-bonding exercise and was not part of a wider team issue.

“The captain, Quinton de Kock, and the team have decided that both he and all of the squad will go away for a two-day team-bonding experience to come up with a new program,” said a statement. “They will be back for tomorrow’s (Sunday) session. The team is unanimous that De Kock’s absence is as a result of team bonding, not an issue.”

But after visiting a cricket school in Kingsport, Tennessee, England’s former batsman Geoffrey Boycott described how he had removed his shoes on a pitch in a cricket ground where players were facing 10 or 11 men outside the “round boundary.”

“I was bothered and confused,” he wrote in The Telegraph. “There was no one in any uniform, one was a flag, the other was a flag with a cow on it. That is unacceptable, but it is what it is.”