This article is over 1 month old Speculative Blue waves the stopwatch at 1.50am while birds screech for his attention. The 30-year-old ripples a drink in a spoon on the table. Suddenly it’s all… 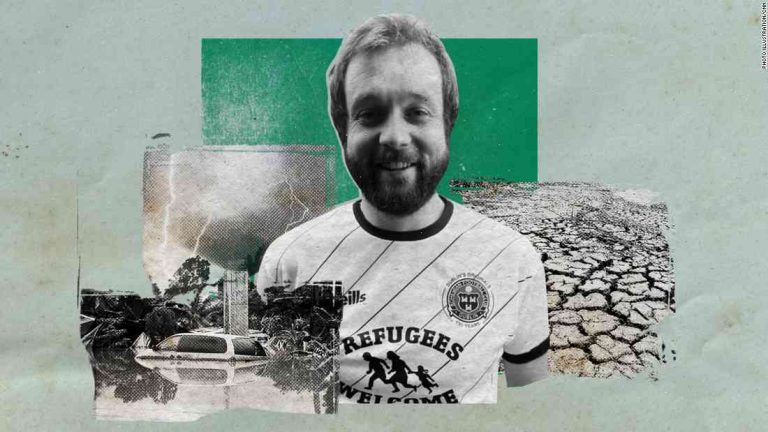 This article is over 1 month old

Speculative Blue waves the stopwatch at 1.50am while birds screech for his attention. The 30-year-old ripples a drink in a spoon on the table. Suddenly it’s all over. Within an hour, a crowd of holidaymakers, film crews and photographers has gathered at the plush Havenfields estate in Marbella. A crew from The Climate Show are there to record the action from the sea.

And it is worth it for the man holding the camera, who is Brent Rushforth, a cameraman with The Climate Show.

Looking like a granny’s scratchy figurine of a binman, his long, scraggly hair has pinned back neatly into a ponytail. A vast moustache is missing from the front. He speaks with a dry Manchester accent and looks at me like a long-haired six-year-old.

He still looks slightly eccentric, which is what makes him stand out from most other football fans.

Rushforth, who calls himself Speculative Blue, is an activist and motivational speaker on global warming, the weather, and the impact we make on the planet.

Last week he was swimming off the coastline in Malaga when he decided to try surfing. Waves could be stopped, he says.

“The wave could be stopped. It’s been done, but it has only been done in minutes. The problem is that when this warning is given, the moment it’s given you can’t stop the whole thing.”

He pulls out a bottle of Benagil or Pallia reserve, a rare style of saltwater surf. In 2015, Rushforth made headlines after he hauled his surfboard out of the water and began using it as a camp stove, to cook cooked cod on. At the time he said the sawing was proof of a connection between humans and the ocean.

He says he has had many such experiences. “Every country I’ve lived in, there have been issues,” he says.

“One of the reasons that I went back to the Falklands [after living in Malaysia] was because the people I dealt with, the people who spoke Spanish, they were in their 60s, 70s, 80s, they had never seen the sea and couldn’t even hold their surfboard up.

“When they see you hold your surfboard up for a long period of time, they’re very curious, like ‘why is he doing this?’

“I tell them it’s a guy who is trying to connect humans to the ocean.”

What is supposed to be the time to go back in the water changed. On his run back to shore he was inspired. This was how he could help, by taking a stand to stop human-created climate change.

“Once I had got back to the house, I had to wash my surfboard. And as I washed it, the skid looked like a wad of paper just stripped off. The full-blown wave. I knew the wave could be stopped. So I know the effects. I know how fast it’s growing.”

He says he will not give up his surfboard just yet.

The Climate Show started in 2014 with a simple idea: change the way people think about climate change. But Rushforth’s idea is nothing like it. Inspired by the words of “filmmaker and creator of Mads Pettersson – the Icelandic prime minister who made a film about climate change titled Nothing but the Sea”, Rushforth says he is not presenting an alternative to mankind’s ever-growing use of fossil fuels.

Instead, Rushforth has developed a way of stopping climate change, which he likens to the Flash of Splintered Gold character in the Little Red Riding Hood fairytale.

He is the Flash, but he’s not alone. And his Force of Nature project is even about more than just surfing.

The Flash uses his own power to stop a tide of damaging ocean pollution. The Star Trek-style force drives itself forward with the flow of thin molecular wires.

Why? Because he doesn’t want to waste more resources on the stuff, Rushforth says. And because he thinks it’s important to put the brakes on climate change at the water’s edge.