Back to top Charles Rizi was the one to make the first coffin for George Bush Sr, and has made almost 200 more in the 40 years since He says he can recall every… 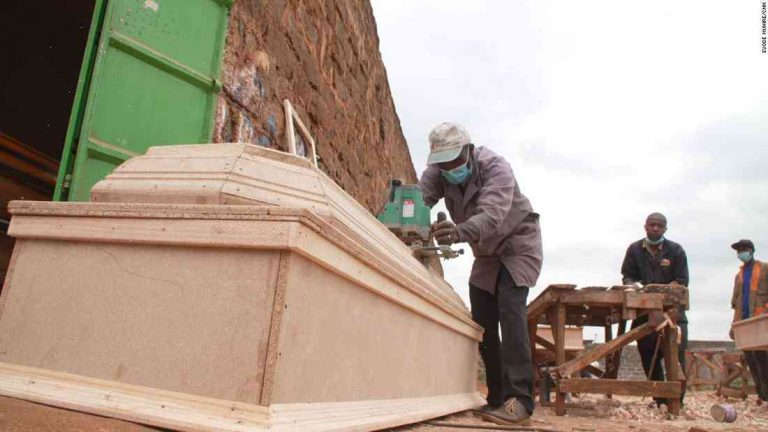 Charles Rizi was the one to make the first coffin for George Bush Sr, and has made almost 200 more in the 40 years since

He says he can recall every coffin he has ever made

“I’m tired. I’m laughing, you know. I work very hard, and when I finish I think, wow! Now I am working again.”

Charles Rizi was the one to make the first coffin for George Bush Sr, and has made almost 200 more in the 40 years since

You see, Rizi still works as a coffin maker, despite the vaccination programme that has cut down on the need for his work.

And he told us when it comes to making coffins for President Obama, he is ready to rumble.

His main moneymaker is funerals. He said there have been up to 30 people a day and sometimes up to 50, at any given time.

On the walls of his workshop, he has dozens of photos of people he has made caskets for, including the president of Ethiopia, the foreign minister of Libya, and a former Kenyan Prime Minister.

His oldest customer to date is probably George Bush Sr, who died last year at 90.

The US president’s daughter Barbara told us, “We’re going to have a big celebration at one of the comforts rooms in the White House.”

William Kipkemoi, a bagmaker who died last year, said it was hard working during the deadly Ebola outbreak in West Africa

There were claims in early 2015 that the Kenyan government was failing to vaccinate people against the dangerous ebola disease. Some businesspeople ran into trouble when the Kenyan embassy in Senegal issued entry visas to some people without these mandatory vaccinations.

When the outbreak was over, the Kenyan embassy returned about 100 visas. But some people refused to accept what had happened.

A Kenyan businessman, William Kipkemoi, told us “The problem was only with the embassy. The Kenya government told us they didn’t have the time to deal with it. It was a one-off problem, we have now moved on.”

In the August last year, Mr Kipkemoi said he spent 12 hours at his shop laying mattresses for Ebola victims, because he wanted to be able to go to their funerals.

“You just seen what the government did,” he said. “As a businessman, you want to take your products to whoever and you can’t.”

He was worried about what the outbreak would do to the economy.

“An economy is just made on one man’s blood,” he said. “Without the man who dies, you know what I’m saying? You hear the cry of the man and the tears of the man and you see people all over the place. It’s going to get bad for Kenya.”

US Secretary of State John Kerry told people arriving in Nigeria for a film festival in January that it would be a “world” event.

He said he wanted the movie to look at a catastrophic famine, and what would happen as the world’s aid workers worked to save millions.

When the international organisation OCHA, which assists governments, wanted to get the film to help raise money for famine victims, a Kenyan journalist got the plug out to the story’s two-metre trailer.

But the Kenyan government had a problem with the trailer, and called in police to protect their investment.

And when an official took it on board, there was a trade-off: free rides at the airport and hotel for the organisers.

This time, about 1,500 Kenyan passengers had to be vetted before being allowed into the country. So the US plane, which came late on the night the film was screened, got no special treatment, although it did land in darkness.